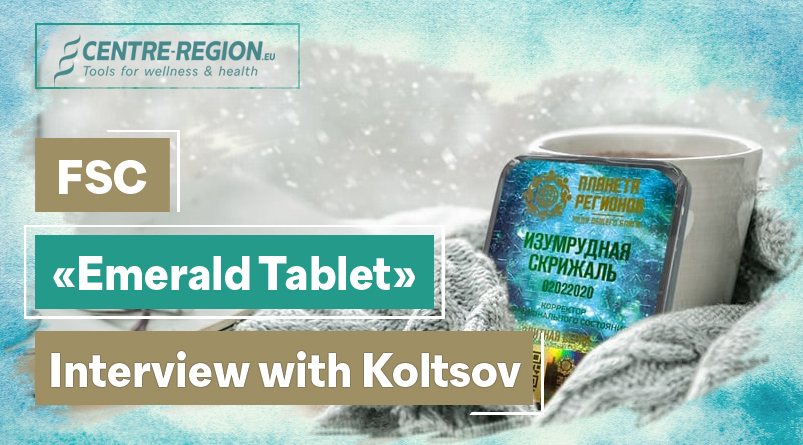 An interview with Serguei Koltsov, the scientific director of Planet of Regions, to learn more about the amazing FSC “Emerald Tablet” from the elite series.

Journalist: Mr Koltsov, how did the idea of developing this Functional State Corrector come to you?

Koltsov: I hadn’t planned on creating this FSC. The energies transmitted by the universe on the mirror date of 02.02.2020 turned out to be really unusual. When the time came to reproduce the FSC, I was amazed. It took 6 full days, that’s a total of 144 hours, to create a copy from a sample of water! To date, it’s an all-time record. Common sense tells me that it’s quite simply impossible to exceed this recording time.

Incidentally, we presented this Koltsov plate to a number of clairvoyants and obtained some very surprising feedback: FSC “Emerald Tablet” doesn’t start working immediately. Just think about it, this theme that took 6 days and nights to record, contains a huge amount of information!

Journalist: So, it takes 6 days and nights to record the information onto the device, whereas water needs 12 hours to be structured?

Koltsov: yes, this concerns containers that are already filled with water which is not moving. When water is running – and I’ve checked this – it’s structured instantaneously. The effect of FSCs is sufficiently powerful to structure water directly. This is very convenient, as all you have to do to structure water is fix the FSC to the tap.

Journalist: because 12 hours seems a really long time! Up until now, it’s never taken longer than 8 hours to structure water. Let’s go back to talking about the clairvoyants who’ve tested this FSC. What information do you have? What makes FSC “Emerald Tablet” so distinctive and different from all the other FSCs?

Koltsov: first of all, it opens differently depending on the person using it. One interesting thing that the clairvoyants observed was that this corrector gradually draws out individual family problems, which the person is perhaps not even aware of. So, different people may feel the effects of the FSC in different ways. This FSC works on all the chakras. But after observing several people, it can be seen to have a particularly powerful effect on the 3rd, the 6th and the 7th energy centres. So, on a physical level, it seems.

They maintain that this FSC brings to the surface a certain number of ancestral programmes. Not all of these programmes, but some of them, are then destroyed. This is already a good start! The clairvoyants told me, “We want this FSC”.

This Functional State Corrector, however, is completely normal. There is no need to be afraid of it, it can’t hurt you. As with all FSCs, the principle behind “Emerald Tablet” is to do no harm.

Journalist: People say that connecting to this FSC is a slow and gradual process, which means that the FSC adapts individually to each person using it. For this, does it need to be left to work for a specific time?

Koltsov: it would seem so, yes. But this time is individual and is different for each person. For some people it will open more quickly than for others.

Journalist: “Emerald Tablet” is an interesting, unusual and sacred name, if you think about what a tablet actually is. How did you get the idea of giving this name to the new FSC?

Koltsov: one of the clairvoyants was working one evening with this FSC. The following day, she suddenly realised that the following principle was at work: what’s on the left is on the right, what’s at the bottom is like what’s at the top. It transforms and cleanses the conscience in some of these ways. There is no harm in that.

Journalist: the development of our soul is probably one of our main goals during our life on earth, even if everybody is not aware of it. FSCs help to increase the user’s vibratory level and in so doing contribute to the development of the person’s soul. How could you describe in a few words what FSC “Emerald Tablet” does specifically? Give us some of its key characteristics.

Koltsov: I think it’s more oriented towards cleansing than to healing, which is just as important. But, time will tell.

Journalist: absolutely, the research is ongoing! Do you need to use the energy of gratitude when you work with this FSC?

Journalist: so it doesn’t need to be activated?

Koltsov: no, there’s no need. None of the FSCs in the Vedic series, including FSC “Emerald Tablet” require activation. What we have here is a connection to very deep cosmic channels. The FSC enables this to occur automatically.

Journalist: can we say that there has never been an FSC of this type, and perhaps never will be, on the one hand in terms of recording time, and on the other in terms of high frequency emissions?

Koltsov: we’ll have to wait and see. But it takes a huge amount of time to produce them. There’s nothing we can do about it. I can’t speed up the process, although the universe only needed a few seconds for structuring.

Journalist: tell us how the creative process went. How did you manage to collect a sample of water on such a special day? Tell us about the procedures you followed. All this is very interesting for product users!

Koltsov: every year I record polarised holy water. The same thing happens with this. However, in this case, what we are dealing with is about fifteen dynamic changes in one night. Of course, the water could be left running all night to record all these dynamic changes, but with the help of years of experience, this is no longer necessary. The respective dynamics are present in the energy flowing in the surrounding space. You simply need to take a pendulum and watch it. As soon as there is an interval of two seconds, I collect the water. But as long as the rhythm of the pendulum is slow, there’s no need to disturb the water.

Journalist: how easy everything seems for a tightrope walker! When you have experience, and knowledge and when you understand the process, and so on, everything is simple. It’s all Chinese to me, whereas for Mr Koltsov everything is so quick and easy!

Koltsov: if someone had told me about twenty years ago that I would take a pendulum in my hands, I would have burst out laughing. When I realised that it was quicker to measure a living organism with cosmic energy, which is also alive, I changed my mind.

Journalist: when you produced the first copy, and when you took this FSC in your hands, what did you think of it?

Koltsov: I said to myself, “it really makes you feel hot!”. In fact, it has the ability to warm you up physically in the area of the 3rd chakra.

Journalist: can everybody use this FSC straightaway or should people, first of all, use other less high-frequency FSCs to prepare themselves for its energies?

Koltsov: everybody can use it. It will just work differently.

Journalist:  will the speed at which it works be different?

Koltsov: as the person using it becomes aware of what he or she is focussing on, the FSC will change the way it works.

Journalist: to get the most benefit out of the FSC, should people use it for a long time, or can it be used and then lent to other members of their family?

Koltsov: it’s quite possible to lend this FSC to other members of your family. I myself use FSC “Emerald Tablet” for two days then I put it to one side. But after a while, it “calls me” again. I think that this FSC really stands out from the whole range of other FSCs, because there aren’t many correctors that work on ancestral problems. This one truly cleanses certain problems of a family nature. We don’t think about them, but they exist. So, it’s a good idea to have one on hand.

Journalist: I would like to thank Serguei Koltsov for finding the time, at this very busy period before Christmas and the New Year, to give us some extremely important information about the new FSC “Emerald Tablet”.